Evander Holyfield (born 1962) is a retired professional boxer from the United States who competed from 1984 to 2011. 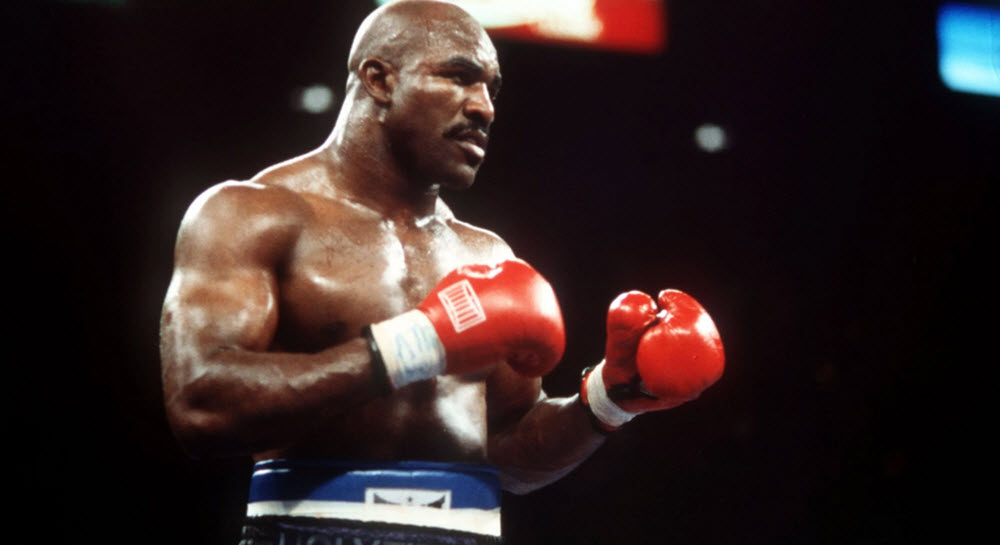 As an amateur boxer representing the United States, Holyfield won a bronze medal in light heavyweight at the 1984 Olympic games in Los Angeles, USA.

In the previous year, he had won silver in ligth heavyweight boxing at the Pan American Games in Caracas, Venezuela.

Holyfield became a professional boxer when he was 21 years old. In 1985 he moved up from light heavyweight to cruiserweight, and in 1986 he won the WBA championship title in that weightclass by defeating Dwight Muhammad Qawi.

To gain the WBC and IBF championship titles, Holyfield defeated Rick Parkey and Carlos de León. Now, he was the undisputed cruiserweight champion.

In 1988, Holyfield moved up from cruiserweight to heavyweight. Two years later, he won a fight against Buster Douglas that earned him the unified WBA, WBC and IBF heavyweight titles and the undisputed heavyweight championship.

Holyfield succesffully defended his titles against George Foreman and Larry Holmes, but lost against Riddick Bowe in 1992. His loss against Bowe was his first one since he turned pro. One year later, Holyfield and Bowe met for a rematch, and Holyfield took back his WBA and IBF titles (but not the WBC since Bowe had relinquished that one).

In 1994, Holyfield lost the WBA and IBF titles to Michael Moorer.

Retirement and return to heavyweight

In 1994, Holyfield retired from the ring for medical reasons, but his retirement became shortlived since he got a clean bill of health the following year.

In 1996, Holyfield battled Mike Tyson in a fight that The Ringe magazine would later name both Fight of the Year and Upset of the Year. Foreman won, and thus got his WBA title back.

A rematch between Holyfield and Tyson took place in 1997 – a fight that became very famous even outside the boxing world as Tyson was disqualified in the third round for biting Holyfield.

Holyfield went on to reclaim his IBF title, and then fought Lennox Lewis in a unification fight for the undisputed WBA, WBC and IBF titles. This bout ended in a controversial split draw. Eight months later, the two fighters met again for a rematch, and this time Lewis won.

The year after losing to Lewis, Holyfield was awarded the vacant WBA title for his victory against John Ruiz. This was the fouth time he gained the WBA title, which was a new record – no boxer before him had ever won a version of the heavyweight title four times.