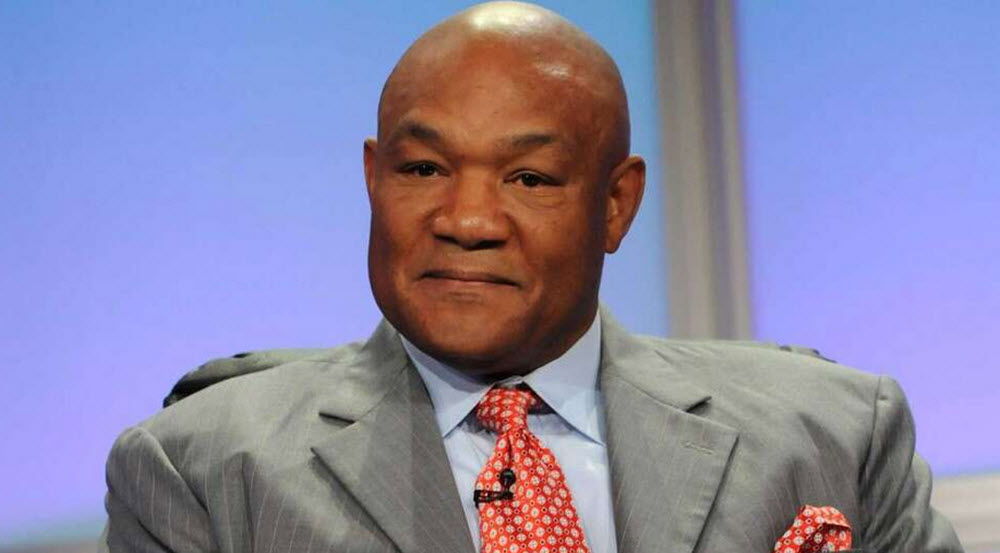 As an amateur boxer, Foreman won a gold medal in the heavyweight division at the 1968 Olympics in Mexico City. As a professional boxer, he is a two-time heavyweight champion.

Foreman became a professional boxer in 1969; a year when he fought 13 fights and won all of them. He won his first heavyweight championship title in 1973 by knocking out the then-undefeated Joe Frazier in the second round. After two successful title defenses, Foreman’s first loss as a professional boxer occured in the famous Rumble in the Jungle match against Muhammad Ali in 1974.

Foreman retired from professional boxing in 1977, but returned to the ring ten years later, at the age of 40. When the 45 year old Foreman obtained the unified WBA, IBF and lineal titles by knocking out the 27 year old Michael Moorer in 1994, he became the oldest world heavyweight champion ever and the second oldest in any weight class.

Foreman continued as a professional boxer until 1997, when he retired with a final record of 76 wins (including 68 knock-out wins) and five losses. Four of the losses were by decision, only one by knock-out.

In the first round against Cepulis, Foreman’s punches made his opponent’s face bleed, and Cepulis had to take a standing eught count early in the round. The referee stopped the fight in the second round and named Foreman the winner of the fight.

In 1972, Foreman (who was now a professional boxer) challenged the then undefeated and undisputed World Heavyweight Champion Joe Frazier.

The fights, billed as the Sunshine Showdown, took place in Kingston, Jamaica on January 22. Frazier was expected to win, and Foreman was a 3:1 underdog as the fight started.

Foreman beat the odds by dominating the fight and eventually winning it by technical knockout. Frazier was knocked down six times withint two rounds (the three-knockdown rule was not in effect), but managed to get on his feet in time after each knock-down. The referee eventually ended the fight and named Foreman the victor.

During his initial reign as champion, Foreman successfully defended his title twice: first against José Roman and then again Ken Norton. Roman only lasted two minutes in the ring, while Norton proved to be a much more difficult opponent.

As mentioned above, Foreman successfully defended his championship title against Ken Norton. The bout took place in Caracas, Venezuela in 1974.

Norton was a highly skilled boxer known for his heavy punch, his strange crossed-armed boxing style and a defensive tactic that was described as “crab-like”. He was also famous for having broken Muhammad Ali’s jaw a year before his fight with Foreman.

During the second round against Norton, Foreman hit his opponent with an uppercut that didn’t bring him down but did send him buckling into the ropes. The punch had a major effect on Norton, who wasn’t able to recover his agility and went down two times in quick succession before the referee stopped the fight.

Foreman lost his championship title to Muhammad Ali in the famous “Rumble in the Jungle” fight in Zaire during the summer of 1974. Late in the eight round, a haymaker from Ali left Foreman off blance, and Ali used the opportunity to spring off the ropes and attack Foreman with a flurry. A hard right cross hit Foreman on the jaw and knocked him out. It was the first time anyone knocked-out Foreman in the ring.

Foreman sought to secure a rematch with Ali, but it never came into fruition.

After returning to the ring after a long retirment, Foreman challenged the 19 year younger Michael Moorer for the world heavyweight champion title. (Moorer had beaten Evander Holyfield for both the IBF and WBA titles).

The fight took place i Las Vegas on November 5, 1994, with Foreman wearing the same red trunks that he wore when he lost his title to Ali two decades (!) earlier.

Moorer was heavily predicted to win the fight, and for nine rounds that prediction seemed to be accurate. In the tenth round, Foreman managed to hit Moorer with several punches, and then a short right hand landed on the tip of Moorer’s chin. That hit caused Moorer’s bottom lip to gash and he collapsed, laying flat on the floor as he was counted out by the referee.

Foreman went back to his corner, sank to his knees and prayed as the spectators celebrated. At 45 years of age, he was the oldest person ever to win the World Heavyweight Championship, and he also broke the record for longest interval between first and second WHC victory. In addition to this, the age spread (19 years) between the champion and the challenger was the largest of any WHC fight.